Two years ago today, we published Special Spaces: Man Cave highlights Antique Tractors over Epoxy Coatings.  It was one of the more unique coatings projects we completed in 2014.   But, it has NOTHING on Man Cave 2! 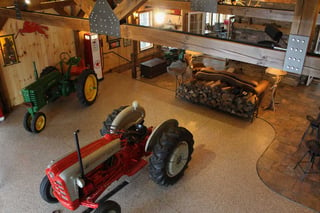 Dave (man cave inhabitant and owner) took things to a whole new level on this project.   Located roughly 10 miles away from Man Cave 1, this project began in early 2014.

No longer content with a pole barn construction, Man Cave 2 is more mountain lodge than tractor showroom.  Featuring wood beams, high ceilings and large fireplaces among its many highlights, Man Cave 2 even has an underground, 100-yard tunnel used as a shooting range!

Early spring of 2014, Zach and I went up to get the dimensions and photos of the new cave.  When we saw the building, it was still in construction, but the bones were there.    This time, Dave wanted our decorative chip coatings in both Man Cave 2 and also his homes attached garage.   We installed all epoxy flooring in late spring 2014.   I finally got to visit the completed project in April of this year. 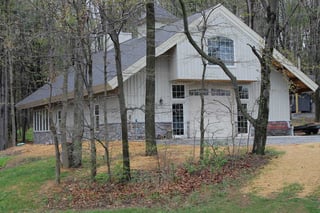 Walking up to the new Man Cave 2, you see what looks like a mountain cabin with a peaked roofline that falls down to a 3’ overhang at the exterior walls.  Large windows in both front and sides let in a lot of natural light and also allows you to take in the wooded lot.  The only thing that makes this 36’ x 70’ building a “garage” would be the garage door that allows access for the antique tractors he has on display inside the cave.

Inside is where this building separates itself from the 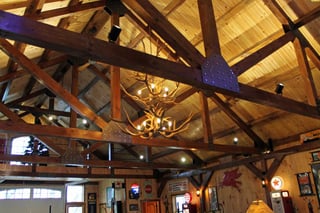 typical garage or man cave.  The building is timber and stone constructed from local materials that are readily available in Dave’s area.  The first thing I noticed were the large wood trusses that were custom made at KSM Log Homes in Lewisburg.

The stone fireplace towers the full height of 22’ to the ceiling.  The living area, bar area and rear 4 season room has slate tiles for the flooring.

Our epoxy flooring, Delaware Hybrid decorative chip, is in the front of the building and makes a perfect parking spot for his antique tractors and vintage gas pumps. 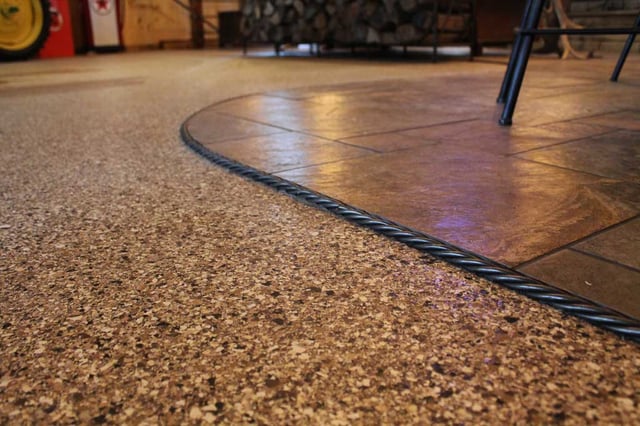 Dave admitted he struggled with a solution for the transition between the tile and our flooring.  So, he found a local metal shop that made a steel “ships rope” transition that was mounted on our flooring and the tile to make a unique transition to protect the tile.  He also had this same company make all of the balusters around the steps and wood crib with the same steel design.  The walls are covered with ship lap, knotty pine paneling and the ceiling is tongue and groove pine boards.  The bar top is a recycled barn timber that he found in his after moving in.  Dimmers on the large antler chandeliers and LED lighting allow Dave to control the amount of light he needs. 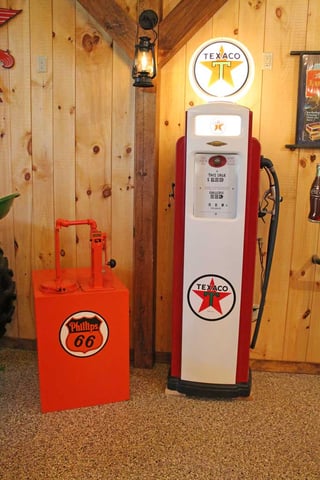 Dave is an avid collector of antiques.  Metal signs, gas pumps, farm equipment, lanterns, etc. fill the space.  He said “it is still not finished and is always a work in progress.”  Among the tractors he has on display are:

Dave said the Ford Power Master is pretty rare and sought after due to it being a diesel.  All of the tractors run and can be used.

Benefits of our Epoxy Floor Coatings

He said “he loves our flooring because it is easy to clean, warms up his cave and is durable for his tractors that weigh up to 4,000 lbs.”  He put York ¼’’decorative chip, epoxy/polyaspartic urethane system in his attached garage where he parks his truck, tractor for mowing and his ATV.  He said he “just hoses it out every once and a while and it looks like new.”

I must say after spending only an hour with Dave, I was amazed what he did with this new building and how he used local builders, materials and his antiques to make it his.  He admitted that he doesn’t spend much time at the house due to “the cave being his quiet area to relax and look at his collection.” 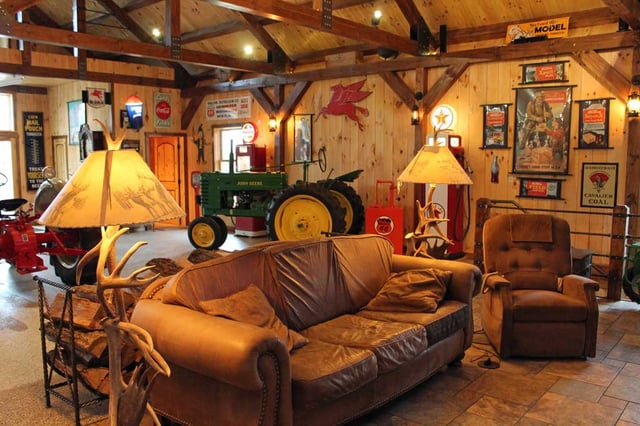 I thanked Dave for the opportunity to help him with our epoxy coatings in Man Cave 2.  Another great example of how our epoxy flooring plays a role in people’s special spaces. 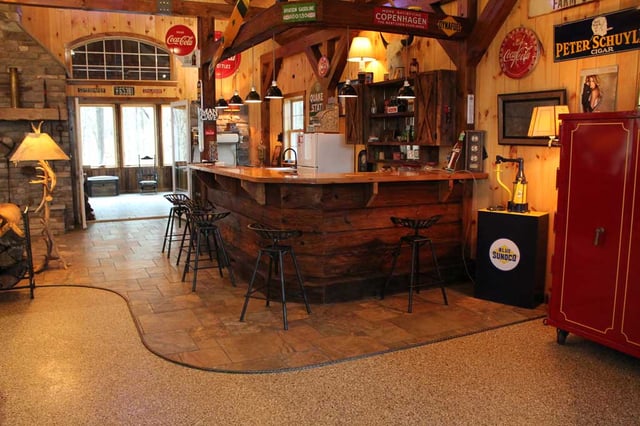 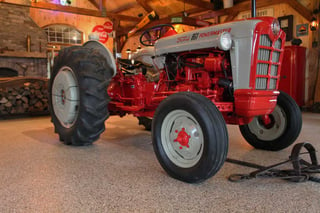 Steve Galeone is Director of Sales & Customer Service for Stronghold Floors.  This was his first time using his new DSLR camera.

Check out the following blogs to see more epoxy projects tied to a special space: